Cindy Frey, a Belgium vegan tattoo artist and tattoo shop owner, reflects, among other things, on the reasons she became a vegan over 20 years ago and why it is important to speak about animal rights.

Cindy, how do you define yourself?

I’m a very happy vegan, and I promote veganism in every possible way. I try to produce as less waste as possible, privately and also in my tattoo studio. I consider myself an activist. I have a page on Facebook and Instagram, where I post information about vegan products and recipes, places where one can eat vegan, zero waste ideas and how to do more for the environment. I’m also a runner – I participate in half marathons and I plan to do my first marathon soon. I wear vegan shirts while running. This July I organised a vegan flash day at my studio with a Loving Hut food truck – 35% of the income went to the Bite Back [Bite Back is a Belgian animal rights organisation that aims to campaign for the rights, needs, well-being and vital interests of animals at regional, national and international level.].

You have been a vegan for over 20 years. What were your reasons for going vegan?

I went vegan 27 years ago. I started as a vegetarian, but after reading more and more, the only way was to go vegan, so I did. I did it for the animals, I didn’t want to abuse them for my luxury anymore. Veganism is super important for me, I love being a vegan. I know that what I do is right – it is the best for everyone (animals, nature, other people, my health, …). My life changed when I became a vegan – I couldn’t eat where I wanted, I had to check the ingredients, people started to act weird (including some getting angry). I felt a lot of hostility back then… but I was determined! 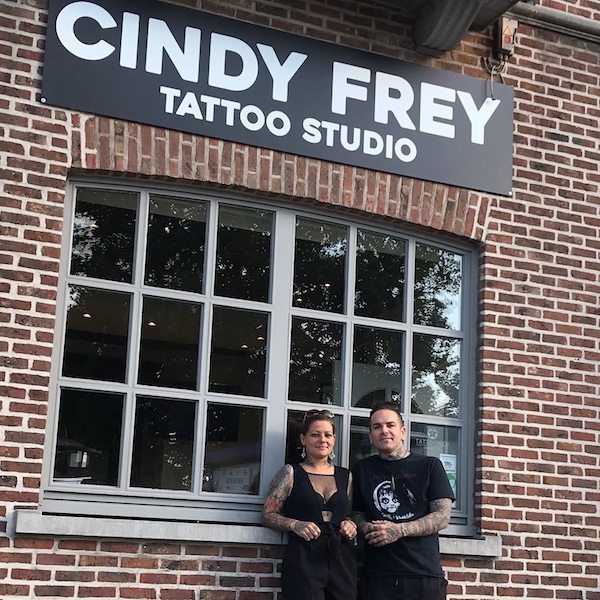 You are the owner of the Cindy Frey Tattoo Studio. What were your reasons being establishing the studio?

Yes, I’m the owner of the Cindy Frey Tattoo Studio. I didn’t really plan to start a tattoo shop, it started as a joke: I tattooed my name on a tattoo artist, just for fun, but he saw I had a steady hand and asked me to become an apprentice at his shop. At first I didn’t want to, but after a year I decided to give it a go, and it became a new passion for me, I really liked it. I didn’t stay long at his shop. I started my own shop and I worked really hard. Soon, me and my husband bought a house with a shop and it grew – we have 6 artists in the  shop and many guest artists who come to the shop regularly. 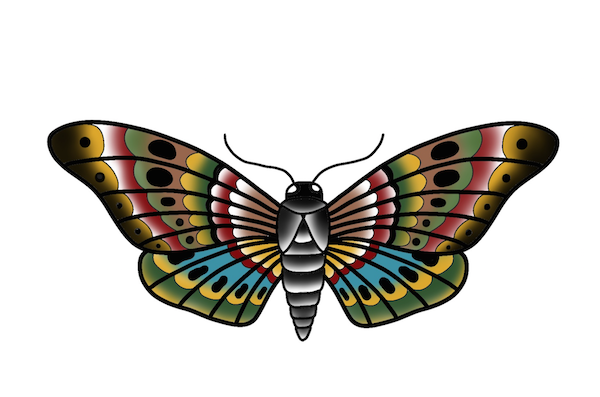 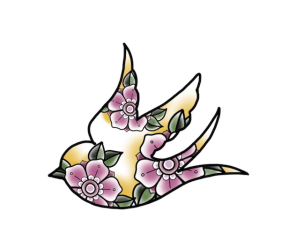 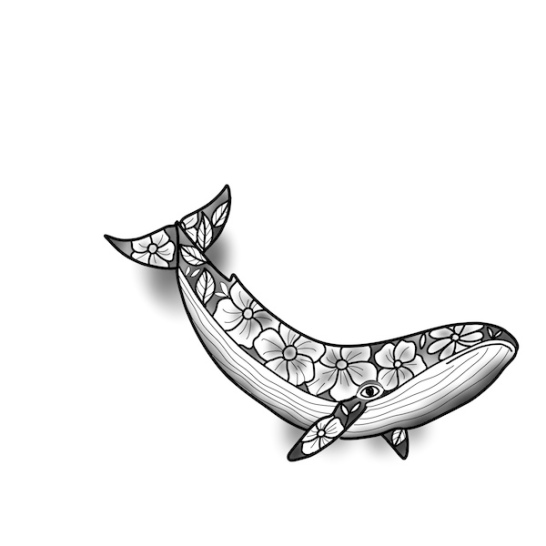 My most important tattoo is a portrait of my mom. She died when I was 17, I still miss her every day, she was such a good and sweet mom. Some people ask me why I have a self-portrait on my body – when this question is being asked, I know I look like her.

The most important tattoo has been done to my dad. He didn’t like tattoos. He always told me that I am ruining my body, but after a while he started to accept it. When it was his birthday, I gave him a voucher of my shop, as a joke, but he did really use it – I tattooed him when he was 67 y.o. He got a bird-of-paradise who lives in New Quinea, because he lived there when I was younger.

Tattooing was once considered a male-dominated profession, but women artists everywhere are changing the game. What is it like being the founder and owner of the studio, a tattoo artist and a woman in the industry?

I’m a strong person and I have always showed up for myself, as a girl and as a woman. I respect myself – if I wouldn’t then no-one would. Also – don’t let any male dominate you! 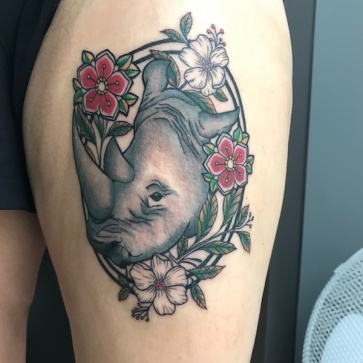 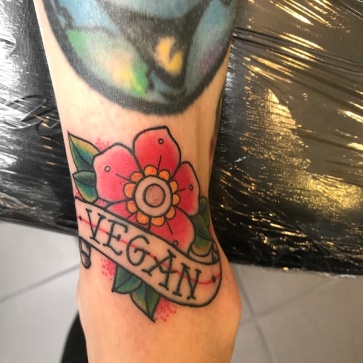 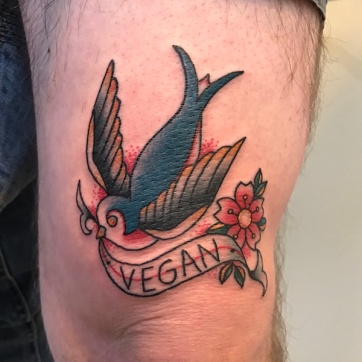 I promote my shop as a vegan shop, where all products are vegan, were we try to use as environment-friendly products as possible with the aim to use less and less plastic (e.g. we use biodegradable hand gloves). We have the possibility to reach many people, so we can raise awareness about veganism and animal rights. We have designed all kinds of animal rights and vegan drawings.

What are the main ways creative professionals, including tattoo artists can contribute to social impact?

First of all, we need to speak out, we need to be proud of being vegans and show it to the people. For example, I show a lot what I eat and what products I use, and why. I talk about these things also with my clients, but I don’t preach. Also, I have vegan tattoos. My aim is to raise awareness about what one can eat and use without hurting animals. I want to spread the word about new vegan products, so more and more people would choose to use them. I also want people to become more aware of the need to reduce trash and plastic. It is important to show practical examples in action, so we sometimes clean the streets with volunteers and collect the mess – it is easy to spread the word with social media.

What needs to happen to improve the rights of animals?

The situation is better than when I became a vegan in 1993, but so much needs to happen to improve the animal rights! Like all cages should be free … We need to be(come) (more) active: to speak about animal rights and doing it in different ways. We will get there slowly, but so much work needs to be done first!

What non-human persons can teach us?

They can teach us how to respect and love each other. Also, animals eat only to survive.

What vegans, creative activists, tattoo artists, etc would you say have influenced you the most, and why?

I didn’t have artists or creative activists influencing me, but I have a lot of respect for Kat Von D, who speaks out about veganism, having a vegan makeup and  also a vegan shoe line. She has a lot of followers, so I’m sure she has influenced many people.

I want to organise a vegan food fest in my neighbourhood with local restaurants to veganize my town a bit more. I’m involved in organising a tattoo convention in my town, called Ink-Town. I’m planning to present a new photobook with kids’ portraits where I do a remake of an iconic album cover – I have an exhibition with 22 pics from this project in my town at the moment. I plan to run a marathon in September – I want to show that vegans can be in a very good shape. So basically – I won’t sit still, I will be active, creating and standing up for the animals!