Melanie Light has a background in film making and since making the award winning vegan feminist short horror film The Herd (2014) she has become more active in the area of animal rights. Melanie talks about her films and the film industry, nonviolent actions, and so much more. 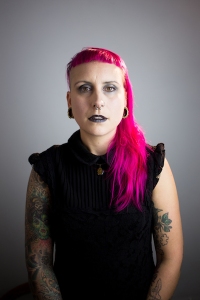 Melanie, how do you define yourself?

I guess I would describe myself as a motivated and career driven person. Creative and imaginative. Determined and sometimes outspoken. As an activist I have had to take a step back as I need to focus on getting my career off the ground in a very difficult industry. Right now I am a keyboard warrior who helps animal rights groups and friends where I can, be it with T-shirt designs, donations or generally spreading the word of veganism to my work colleagues (who are usually very much not vegan). I want to use my power as a director to promote vegan, feminist and environmental messages on film and also behind the camera which will reach out to a wide audience but right now I need to focus on getting to that point where I can be influential on a larger scale. Before I was very much spending all my free time to working with local animal rights groups with design elements, attending Save Vigils and demos, and out reach events when and where I could.

What are veganism and feminism for you?

They go hand in hand. Look at how females are exploited in the meat and dairy industry and then how female humans are promoted as meat, objectified and seen as a second class humans. Specisism plays a large role in this along with patriarchy. Feminism is equality and I believe non humans are part of this equality.

I was vegetarian for years before I went vegan which was thanks to Ed Pope, the writer of The Herd. I couldn’t make the film as a vegetarian and to be honest I was pretty much 90% vegan anyway so it was such an easy step for me. It’s amazing how veganism really is like taking the red or the blue pill. I am happy that I no longer consume the bodies and milk of animals. Being vegan in a very non vegan environment is hard and the film industry is actually really far behind. I can’t wait to be in a position to stop the harm of animals in the industry and influence people into being healthier and more compassionate!

What do you think why there is a lack of alliance between veganism and feminism, and why is vegan-feminist discourse struggling to leave its niche and popularise among the feminist movement?

See above and I would say that there are still many people that do not see the connection between human and non human. They struggle to understand that non humans deserve just as much a right to live a happy fulfilled life as much as a human. I feel that there is a strong understanding in the vegan movement of feminism. I find the issue is more the feminist way of thinking accepting the connection with veganism. It comes down to education and understanding. I read The Sexual Politics of Meat by Carol J. Adams and that really opened my eyes to how the two are so intwined. I recommend reading this book for all vegans and feminists alike. 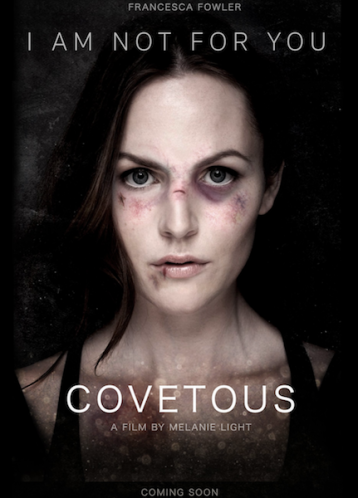 Your film Switch (2010) turned tables on a typical male killer, the Escape (2012) was a visceral rape revenge film and Covetous (in development) will deal with the consequence of abuse. What was/is your drive behind making these films?

Sometimes the art we make has messages which we don’t always notice until later, this is the case with my first short films. This is just how I naturally see life and think. These films deal with abuse towards women and comes from everyday life. The subject matter is something which I feel strongly about due to literally opening my eyes to the world we live in. Real horror literally starts at home for some people. Let’s talk about your film The Herd that is known as the first vegan feminist horror film. What do you want your audience to gain, feel and/or do as a result of watching the film?

Ideally, to stop drinking milk or to at least start looking into a more plant based diet, to look at how females human and non human are exploited and objectified and to plant the seed in peoples brains to help them work towards a better future for all.

You have said that “/…/ despite the few reviewers who have accused us of hammering home our agenda, others still miss the point entirely. It is a political film, and there are people who may not agree with it, or may be offended, but I think if you’re going to make a film with a message, you want that message to be clear.” Can you elaborate on this?

When The Herd went online, it got some flack from some feminist websites. I never read these articles as a friend wouldn’t let me read them or send me the link. I would have liked to have read them as its valuable to read good and bad reviews. If it is positive criticism then I will take that on board. I did have someone accusing me as being misogynistic with The Herd, which is kinda the point. WE were highlighting an action towards females that needs to change. Sometimes you have to really lay it on thick to make it heard. Its more punk and some people need it drummed in hard.

Film making was once considered a male-dominated profession, but female film makers are changing the game. What is it like being a film maker and a woman in the industry?

Looking at the recent statistics and this years Oscar nominations females are way behind still. This is not just directing but in many lead roles behind the camera. There are people making their lead a female protagonist but it needs to be more than that. People are quick to talk about the issue but don’t actually put it into practice. We need our allies to support this change. When I work in the art department on set I feel like I get less respect in my role than if I was a man. As a director I feel like I finally get listened too and respected, unfortunately this hasn’t happened enough! I also see male film makers with less experience than me getting more support and climbing the ladder a hell of a lot faster and I just can not get my head around it, its very frustrating.

What are the main ways film makers, e.g. art directors and directors, can contribute to social impact?

Personally I am interested in politics and making the world a better place for all humans and non humans and this is put into my own films. Whilst still being highly entertaining in a horror film thriller kinda way. You see film directors like James Cameron who only has vegan catering in his productions and has vegan messages in his recent films. Darren Aronofsky made Noah which was super vegan but I think he is a vegetarian. Film is such a powerful tool to highlight messages, you can’t change the world in an instant but you can make people start thinking in a better way and to educated. Look at the recent work of Spike Lee and Barry Jenkins and the powerful messages they are putting out about race.

As a designer you can add graphic design elements and bits of set dressing within a film to get messages across. In cinematography you can use what is known as bisexual lighting of the purples and pinks. In casting you make sure you have people from different ethnic back grounds in occasions where all the characters would usually be white, you can cast a gay actor as a straight character in a story there are always ways we can work in parts to film making to help build a better future.

Animal Justice Project is an animal rights organisation working to end speciesism. They focus on spreading a vegan message and to bring to light the awful life animals are living behind closed doors in animal research and vivisection on a global scale.

Can you name the best methods of nonviolent struggle?

Protest, sit ins, demos, stickering. Mass walk outs. I feel like using social media to gain traction and coverage of peaceful protests and walk in and sits ins is so important these days as this means you can educated a wider audience.

Tobias Leenaert, a long-time speaker, trainer and strategist, and the author of How to Create a Vegan World: a Pragmatic Approach (Lantern Press, 2017) has said: “In this world where there is so much suffering, it’s hard to do enough. Doing your best is maybe never really your best, because you can always do better. We can spend more money on good causes, and watch less Netflix, and help more.” Can you say something about that?

I would say that even just being vegan means that you are helping to save animals lives. Some people struggle with confrontations and thus would not be able to do animal rights publicly (always get at least one person giving you shit even on outreach) some people can just do protest, some people make art or take photos, some people go hunt sabbing, some people start organisations, some people volunteer at animal sanctuary’s. Some people just retweet on Twitter. I would say that you do what you can do. Not all of us have the time to put in like others. This doesn’t make you less of an animal lover or a bad vegan. I feel like everyone has a level of what they can commit. I had to take a step back, all my free time was spent on animal rights and I was letting my film career disappear as its something I need to fight for as I know I will be much more useful to the animals when I get myself to a level where I can really reach out to people to make the change and be a influencer. I find that even when I walk into a room people start feeling guilty about what they are eating. A friend of mine took the fur off her Canada Goose jacket and covered the logo as she didn’t want to be offensive and realised where her fur trim came from. Even the smallest step is a step and as individuals we are all different and will find the way we can to help save animals lives daily.

What vegans, creative activists, etc would you say have influenced you the most, and why?

I am a big fan of the comics by Matt Miner. He has Liberator, Critical Hit and now Lab Raider. We are working on a collaboration together for a film. Also Shad Clark who is a comic film maker and the director of the Animal Equality VR film. Shaun Monson, the director of Earthlings.

Ethically Elizabeth as she’s fucking badass and works so hard for animals daily. Emily the Bitesize Vegan – I watched all her videos when I first went vegan and found them a really great simple informative piece of vegan education. Carol J. Adams – her books about veganism and feminism are so on point. Melanie Joy – her books are a great read too.

I am working on a couple of feature films, trying to get funding and my work seen and heard by people that can employ me as a director. I have some films about women’s rights and a couple about AR! WE shall see what happens!

2 thoughts on “Promoting vegan, feminist and environmental messages on film and also behind the camera: Melanie Light (UK)”